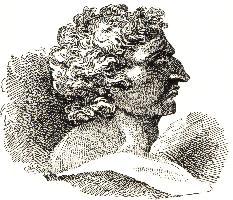 Thomas Spence was born in Newcastle in 1750. Spence was the leading English revolutionary of his day, with an unbudgeable commitment to individual and press freedom and the common ownership of the land.

His tracts, such as The Rights of Man (Spence was, perhaps, the first to use the phrase) and The Rights of Infants, along with his utopian visions of 'Crusonia' and 'Spensonia', were the most far-reaching radical statements of the period. Spence was born in poverty and died the same way, after long periods of imprisonment, in 1814.

Although sometimes hailed as England's 'first modern socialist', Spence is not easily corralled by later ideologies. He was a mortal enemy of tyranny and what he called 'giantism' of all kinds.

It's time for a little more music on this website!

Thomas Spence was a man of song - this was how he  spread his message. The great songs below are recent creations by Tim Martin, Ed Pickford and Keith Armstrong and The Sawdust Jacks; all about Spence and his vision.

The Political Thought of Thomas Spence

Beyond Poverty and Empire,

Check out this new article by a scholar from the University of Bologna on Spence's influence and interests in the 'New World': Matilde Cazzola (2017): “All shall be happy by land and by sea”: Thomas Spence as an Atlantic thinker, Atlantic Studies 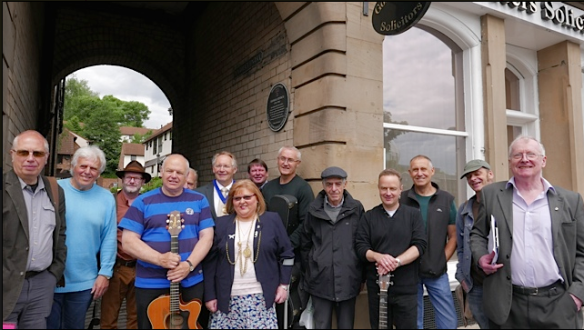 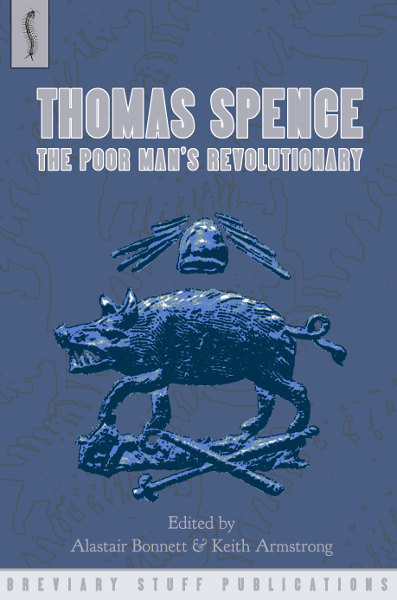 ♦ The Economic Ideas of Thomas Spence: The Right to Subsistence John Marangos, Professor in the Department of Balkan, Slavic and Oriental Studies, University of Macedonia

♦ ‘Meet and Sing, and Your Chains Will Drop Off Like Thread’: The Political Songs of Thomas Spence Michael T. Davis, Lecturer in History, School of Humanities, Griffith University

♦ The Constitution of Spensonia (1803) Thomas Spence 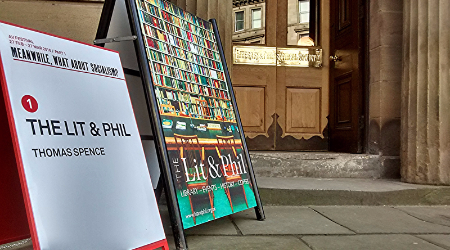 Spence at the Lit and Phil (Newcastle), March 2016

The city wide arts event, AV Festival, had the theme

'Meanwhile, What about Socialism?' across March 2016. Alongside talks there was a display of Spence tokens. 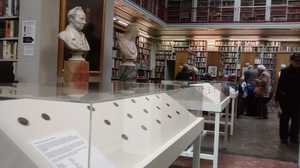 Essay on Spence and the 'Northumbrian Enlightenment'

Radical Reformer in the Age of Revolution

2014 was the 200th anniversary of the death of Thomas Spence.

The best tribute to Spence is to oppose the privatisation of public services and public space.

http://anticutsnetwork.blogspot.co.uk/
An activist network of workers, students, retired and claimants in and around Newcastle-upon-Tyne. The network was launched out of the bottom up protests of the students, which others were keen to support and now campaigns against cuts. They meet every fortnight at organise specifically to oppose cuts to services, jobs and communities and aim to coordinate with other local campaigns including campaigns to save Libraries; Youth services; Play services; Pools & Leisure centres; City Hall; Sure Start services etc.
anticutsnetwork@gmail.com

A  Memorial for Spence

Unveiled on the 260th anniversary of his birth

In bright sunshine a good crowd turned up to see the unveiling of the memorial plaque, sited at the bottom of Broad Garth, on Newcastle's Quayside. 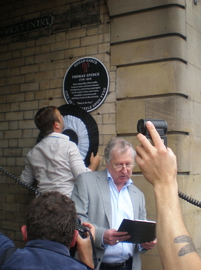 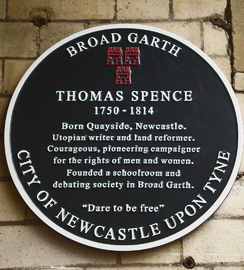 Blogs on the Spence memorial events:

Spence's key statement was delivered to the Newcastle Philosophical Society in 1775. Spence was kicked out of the Society for printing his speech and selling it on the streets of Newcastle.

For many years the only edition that was thought to survive of Spence's lecture was from 1793, titled 'Rights of Man'. Dr David Gardner-Medwin discovered the orginal pamphlet at the Newcastle Literary and Philosophical Society (founded 1793). We now know it was originally titled 'Property in Land Every One's Right'. This is a significant discovery and will be welcomed by everyone with an interest in British political history. A comparison of the original and later editions can be found at the end of the 'Debates' pages. 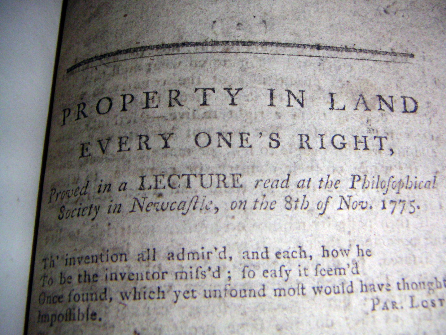 (with thanks to the Newcastle Literary and Philosophical Society)

Spence's journal - called Pigs' Meat - has been digitised by Eighteenth Century Collections Online. Volume One is available by the link below. Volume Two is also available on the same site

Another access point to the journal is through the link below:

A number of Spence's pamphlets have been scanned in Gale Eighteenth Century Collections Online. These include hisThe Coin Collector's Companion; The Case of Thomas Spence [1792 trial], A s'upl'im'int too thi Histire ov Robinsin Kruzo [written in Spence's phonetic script; and scanned so badly as to be unreadable] and The Reign of Felicity, being a plan for civilizing the Indians of North America. The latter is an important work in which Spence imagines Native Americans being oppressed by both landlords and religion. Though the scanned version isn't very clear it can be read and is worth looking at. It is available by clicking Reign of Felicity at end of this section.

An interesting Spencean book, Allen Davenport's (1836) The Life, Writings and Principles of Thomas Spence, author of the Spencean System, or Agrarian Equality has now been digitised by Google. It is available by clicking The Life, Writings and Principles at end of this section. Davenport, a follower of Spence, says of his book: 'We have seen many physical revolutions, and some moral or legal reforms; yet none of these changes have put a single extra loaf of bread into the cubboard of the poor. But in the reform that is here proposed, all the advantages will be, as they ought, on the side of the working man ... Every thing that is necessary to prepare the public mind for this great CUPBOARD REVOLUTION, or agrarian reform, contained in this truly philanthropic system, will be found in the following pages'

Ian Robson's interview with Alastair Bonnett on Thomas Spence appeared in The Journal July 13th 2010, titled 'Shedding light on life of unsung local hero'. It can be found at: http://www.journallive.co.uk/lifestyle-news/newcastle-features/2010/07/13/shedding-light-on-life-of-unsung-hero-thomas-spence-61634-26838256/

'The Other Rights of Man: The Revolutionary Plan of Thomas Spence' by Alastair Bonnett, History Today, September 2007, pp.42-48 TO READ THIS ARTICLE CLICK historytodayspence.pdf BELOW

Three Spence texts not included on this site can be found at:

Links on The Society of Speancean Philanthropists:

Link to the Thomas Paine Society:

Full edition of Paine's The Rights of Man :

Thomas Spence.co.uk has been founded to help ensure that the name and ambitions of Thomas Spence live on. We do not exist to venerate Thomas Spence. We welcome debate and contributions from readers on Spence's legacy and why it matters today.

Please note: Unfortunately there is no 'Thomas Spence Society' to join. It's just the domain name for the website, one which we are stuck with. 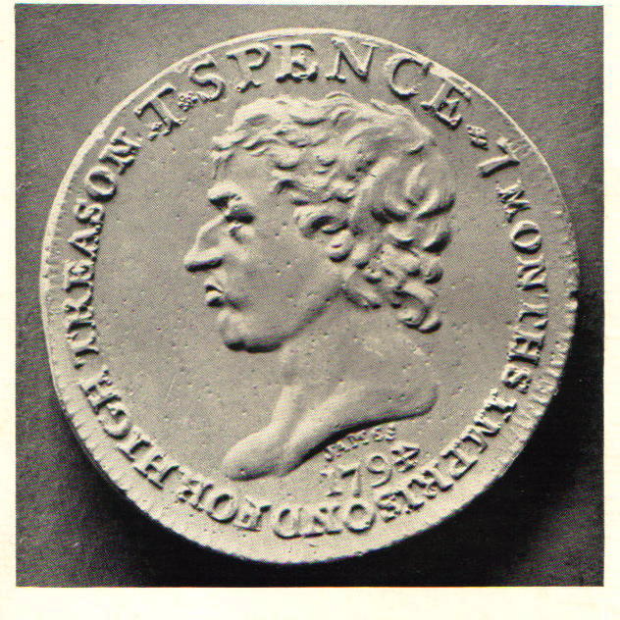